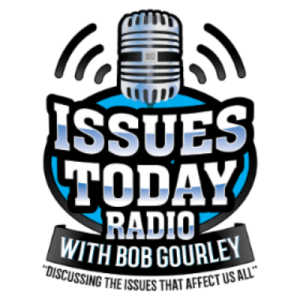 Host Bob Gourley has been discussing “issues that affect all of us” since 1998. From health to the economy, he has his fingers on the pulse of the country interviewing leading experts in their fields. Past guests include conservative pundit Ann Coulter, actor and financial guru Ben Stein and Senior Political Analyst Michael Barrone. Gourley’s career began in public radio in Long Beach, California as host of “For Your Information.” He later managed the first all-business radio network Money Radio. His next stop was Financial Broadcasting Network as Senior News Producer. A Southern California native, his work appeared on United Press International, Associated Press and the NBC Radio Network. “Issues Today” began in Los Angeles on legendary KPPC Radio where Mr. Gourley was Public Affairs Director. His company Gourley Group produces the program for distribution in markets around the country.

Mar. 5-Mar. 11:  Mitch Margo will detail why racism still exists in the United States. Nicholas Tampio will talk about common core. Famed researcher Max Boot will talk about the lessons of Vietnam.